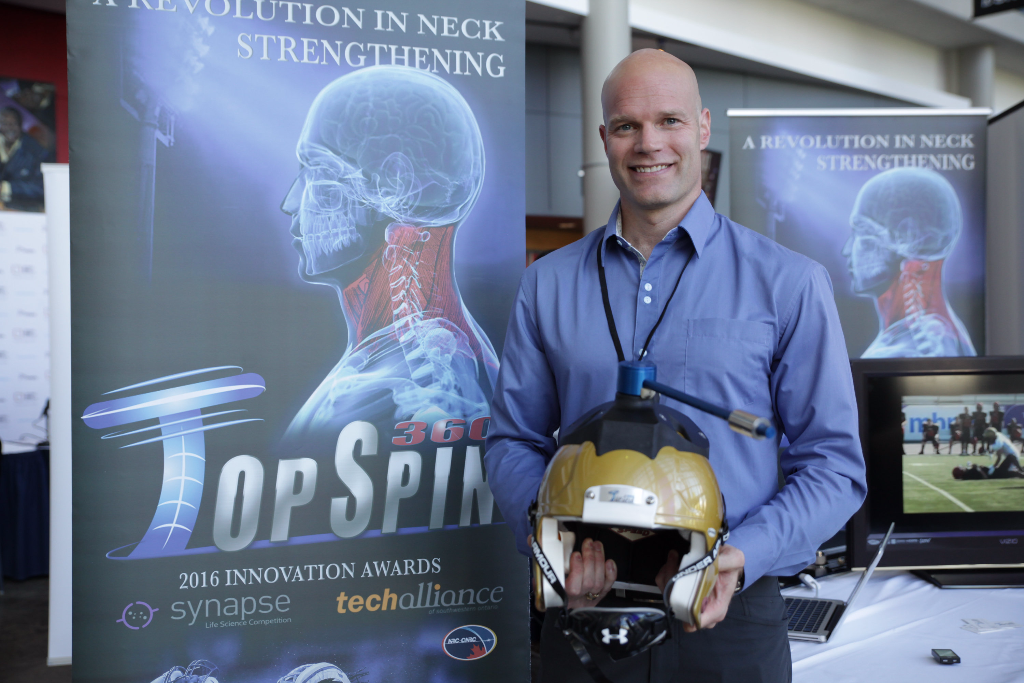 It’s easy to take for granted how important a healthy brain is until it isn’t.  Made up of billions of interconnected cells, the human brain, encased in a solid boney skull, is remarkably resilient but this does not make it immune to injury. When the head is shaken or jarred, the brain can collide with the skull, damaging its cells and causing a cascade of negative symptoms. Brain injuries are still categorized using a clinical consciousness scale as mild, moderate, or severe and concussions are a form of mild traumatic brain injury (TBI). The incidence of moderate and severe TBIs can be tracked through hospitalization records, but concussions, which make up 80% of TBIs, generally do not reach the hospital and may be underestimated among populations world-wide.

Societal awareness around concussions is increasing thanks to the efforts of high-profile athletes such as   former NHL player Eric Lindros, a well-known proponent of concussion awareness and care.  Current NHL players are following in Lindros’ footsteps including Gabriel Landeskog, Captain of the Colorado Avalanche, who said that it’s time to “stand up and speak up” about concussions and the associated stigmas.

Though we hear of concussions mainly in the context of hockey, football or rugby, it is not limited to athletes playing sports. In fact the vast majority of concussions (70%) do not result from sports.  In addition, there are over half a million Canadians living with some form of moderate-to-severe TBI as a result of motor vehicle accidents, falls and workplace injuries.  Concussions, though often difficult to diagnose and see, can have real cognitive and mental health consequences and negative effects on someone’s quality of life. For this reason, it is in our best interest to invest in research that will deliver better diagnosis, treatment and prevention of TBIs, including concussions.

What’s being done in Ontario?

Ontario is home to some of the best neuroscience researchers in the world. It also plays host to an emerging neurotechnology cluster—a growing community of people and young companies developing technologies focused on the brain.  OBI’s goal is to connect them in a pursuit to advance the development of tools and treatments that will improve the lives of people living with brain disorders. With over 227,600 Ontarians living with moderate-to-severe traumatic brain injuries1, and more than a million with concussions, there is an obvious need for more work to be done in this area.

In 2010, when OBI was first getting off the ground, seven areas of research were prioritized. This was done by examining the strengths of the research community and the opportunity to drive health and economic impact by engaging in collaborative research. Concussion was one of these originally proposed areas, and although it did not become established as one of OBI’s five research programs at that time, OBI has provided some support to the concussion research community to help explore the possibility of expanding it in the future.

This fall, OBI in partnership with the Ontario Neurotrauma Foundation, organized a symposium with researchers across the province to discuss what would be involved in creating a collaborative research-to-care strategy in Ontario. The meeting brought together TBI researchers from multiple disciplines including clinicians, geneticists, neurobiologists and neuroimaging experts. Improving concussion detection and diagnosing concussion severity are two of the critical areas that were identified.  As it stands, there are some promising developments, but current neuroimaging techniques, such as magnetic resonance imaging (MRI) and functional magnetic resonance imaging (fMRI), cannot reliably detect a concussion. Some researchers suggest that a combination of multiple diagnostic modalities may provide a more accurate method to detect concussion and may also provide a window into assessing concussion severity.  Such a tool could prove to be useful for the diagnosis and monitoring of concussions, ultimately helping those affected by it to return to normal activities.  Efforts to realize such goals would require Ontario’s extremely talented concussion research community to come together in a strong collaborative effort.

This year, one of OBI’s ONtrepreneurs is tackling some of the current gaps in concussion care.  While there has been research effort devoted towards the diagnosis and treatment of concussions, there remains limited knowledge around concussion prevention.  Dr. Theo Versteegh, a former varsity football player for Western University, is a researcher on concussion prevention and is a 2016 ONtrepeneur. Dr. Versteegh’s product, TopSpin 360, is a neck training device aimed to reduce the risk of concussion in athletes. The device utilizes a modified football helmet to strengthen users’ necks using rotational forces which can be experienced in concussion-inducing impacts.  Increasing neck strength in this manner may help people reduce head rotation when experiencing whiplash-type movements, which can lead to a concussion. The device was piloted at Western University with members of the men’s football team, and results from the initial study were promising—athletes using the device reported fewer concussions than those that did not2. The device may be especially useful for female athletes, as females may be more susceptible to this mechanism of concussion due to their smaller neck musculature.  Dr. Versteegh and his team are currently making TopSpin360 available to elite-level sports teams and potential research partners.

OBI believes that future collaborations between Ontario researchers and clinicians can pave a path for scientific breakthroughs in TBI diagnosis, prognosis, rehabilitation and prevention. In partnership with industry, these breakthroughs can result in meaningful technologies to prevent TBI in at-risk populations and technologies to enhance TBI recovery. And with the support and input from patients and their advocates we can ensure that we are focusing on the right areas of research and getting new knowledge out to the community. We are all working towards a future where TBIs are no longer a mystery, where people living with TBI can be accurately diagnosed and treated so that they may return to leading fulfilling lives. OBI believes it can be done; it’s just a matter of connecting the right people.