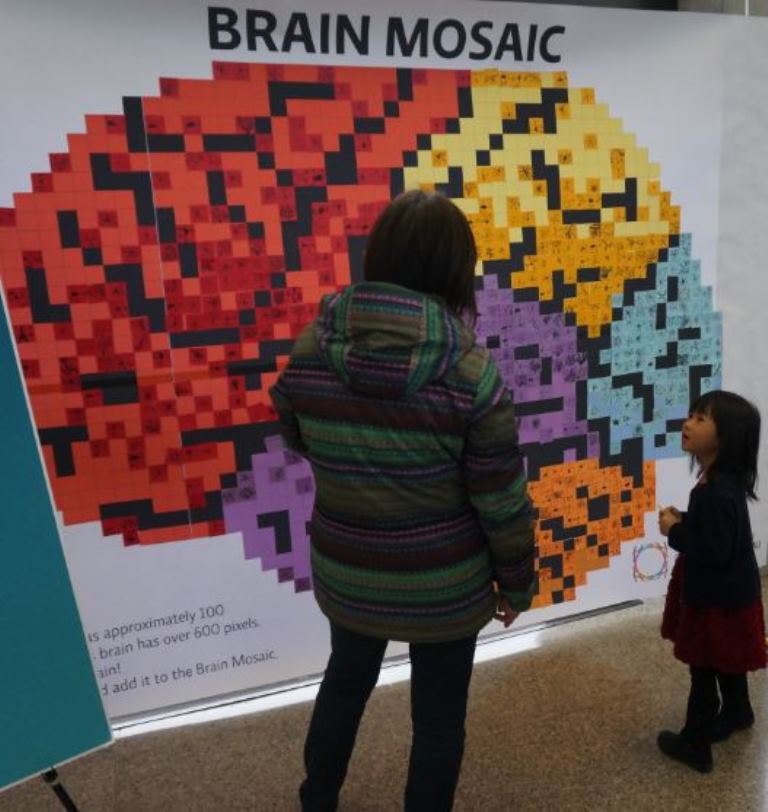 While autism, epilepsy, or depression may at first seem worlds apart, there is benefit in studying these and other brain disorders together. Each condition has unique traits, but there is often overlap. For instance, people living with autism may experience depression and people living with cerebral palsy may have seizures. Brain research is inherently complex – different disorders may share similar underlying causes and similar disorders may have very different underlying causes. Although this makes things complicated, it also creates an opportunity to borrow insights from one disorder to inform research into another disorder.

OBI aims to make a transformative impact on the way research is conducted by creating the opportunity to study brain disorders together, rather than in isolation. In setting the stage for this kind of collaboration, we can expect to see new kinds of research questions and discoveries. For this reason, cross-disorder collaboration was  a main focus of OBI’s Science Advisory Council and Industry Advisory Council meeting, which was held in early November, 2015. There are several cross-disorder collaborations at OBI that are already in development: the collection of common data elements across programs, a drug discovery pipeline for Rett syndrome, and the collaborative development of new imaging tools for preterm infants and adults with dementia.

The potential for collaboration between researchers studying different disorders is built into OBI’s programs. All five Integrated Discovery Programs are collecting data in the same way because of agreed upon common data elements (CDEs). Data can only be compared to each other when they are standardized, meaning collected in the same way, and with the same tests. CDEs captured by the programs consist of tests or questionnaires that every study participant takes part in. For example, all participants complete the same scales to identify depression, anxiety, and sleep quality. By having protocols to collect these measures consistently and in the same way, these data can be compared between all participants, whether they are enrolled in a study on cerebral palsy, dementia or other brain disorder. The data are kept secure in OBI’s online data management platform, Brain-CODE, where only the intended researchers can gain access to analyze datasets. Some programs collect common data between different disorders. For example researchers from the Ontario Neurodegenerative Research Initiative (ONDRI) who want to predict dementia at its earliest stages by looking at common indicators across five different disorders. For this reason, ONDRI researchers collect data on gait from all participants whether they are affected by Alzheimer’s disease, Parkinson’s disease, amyotrophic lateral sclerosis (ALS), frontotemporal lobar degeneration or vascular cognitive impairment. While it may seem unintuitive to look at movement in Alzheimer’s patients, researchers are beginning to realize that changes in the brain associated with dementia can also lead to subtle changes in mobility. Data standardization opens the door for new research questions to be asked across brain disorders and new insights into the underlying mechanisms of the disorders.

Rett syndrome is a neurodevelopmental condition that primarily affects females, and is characterized by challenges with mobility and speech, intellectual disability, and distinct repetitive hand movements.  Individuals with Rett syndrome often have epilepsy, which is characterized by repetitive seizures. OBI recently partnered with the Structural Genomics Consortium (SGC) and researchers at SickKids and the University Health Network to advance our understanding of Rett syndrome and identify potential treatments. Three OBI researchers are working across brain disorder areas to find new potential drug leads. Drs. James Ellis, Jason Lerch, members of the POND research program on neurodevelopmental disorders, and Dr. Jim Eubanks, a member of the EpLink research program focused on epilepsy, have created a drug testing pipeline. Drawing on each of their areas of expertise, they are testing compounds from the SGC to find new potential drugs. Dr. Eubanks’ team is testing the drugs in mouse models of Rett syndrome, looking at whether the compounds are able to change the impacts of Rett syndrome. The brains of these mice are examined by magnetic resonance imaging (MRI) scans by Dr. Lerch’s lab. In tandem, Dr. Ellis’ lab is testing the drugs on human cell lines from Rett syndrome patients to see how they affect factors like cell shape and activity since abnormalities with this are common to Rett syndrome. Working across programs, the teams are combining their methods to rigorously test the drugs in both animal and human cell models, which will demonstrate the potential use of these new compounds in Rett syndrome treatment.

Seeking clues from opposite ends of the lifespan

What do very preterm born infants and aging adults have in common? Both can have brain injury that impact the brain’s white matter, which is made up of crucial signal-sending nerve fibers. Dr. Sandra Black, a member of ONDRI, and Dr. Steven Miller, a member of the CP-NET Program focused on cerebral palsy research, are collaborating to develop imaging tools to better understand damage to white matter in both infants and older adults. Dr. Black’s team is investigating white matter abnormalities in aging adults, which are associated with increased risks of dementia and stroke. Understanding white matter abnormalities can help assess a person’s risk for stroke and dementia, enabling better care. Dr. Miller’s team is studying white matter development and damage in very preterm infants. Very preterm infants can develop brain injuries, particularly involving damage to white matter  which can result in cerebral palsy and other impairments in a child’s development. The Miller lab aims to understand why these infants develop white matter abnormalities, so that they can determine how to prevent the brain injury and to counsel parents on what to expect in their child’s development. While each team is focused on seemingly different populations, they are working together to share and develop new MRI brain imaging analysis tools. Analytic tools are being developed by both teams to quantify brain damage and to develop imaging tools that would assist clinicians in reviewing the scans. While the cause of brain injury may differ between infants and adults, collaboration between the Black and Miller labs is advancing each team’s neuroimaging efforts and opening new lines of questioning. By combining their knowledge and talent, the Black and Miller research groups stand to increase our knowledge of brain injury affecting white matter across the lifespan, ultimately improving how clinicians council patients, and driving forward the study of the disease cause, prevention and treatment within both populations.