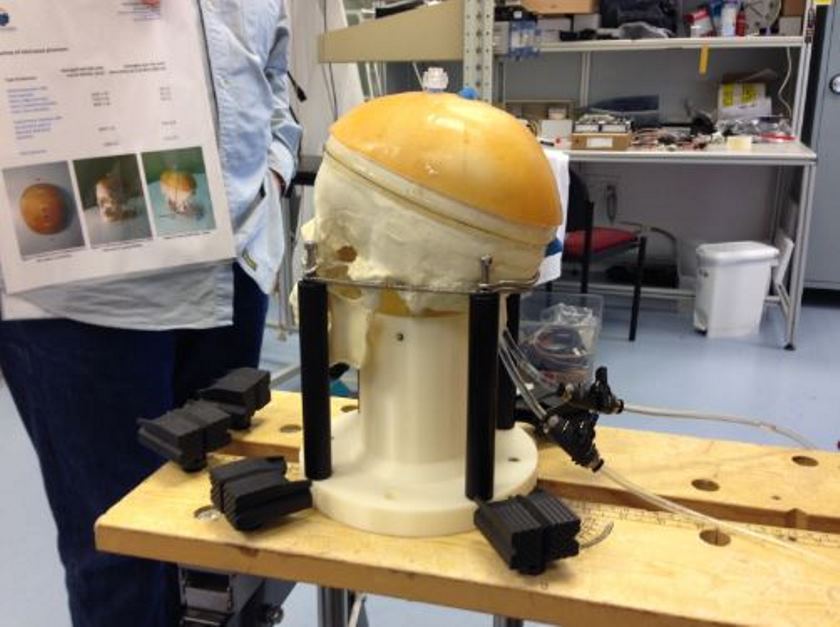 Imagine you are treating someone with a suspected traumatic brain injury—what if you could have a non-invasive look inside their brain to assess the damage and decide on treatment? Ontario-based Tessonics Inc. developed a device that could do just that, but the next challenge was how to properly calibrate the device to ensure reliable and consistent measurements. This question drew Adrian Wydra and Dr. Roman Maev of Tessonics Inc. into a partnership that would enable two companies to drive innovation in Ontario’s neuroscience landscape.

The collaboration began at the University of Windsor when Adrian Wydra enrolled to pursue a Masters in Physics. Adrian had already completed a Masters in Biomedical Engineering from the Wroclaw University of Technology where he had been using his knowledge of physics, biology, and chemistry to advance research in artificial tissues. He was drawn to Windsor by the work of one of the University’s distinguished Professors, Dr. Roman Maev who—in partnership with DaimlerChrysler—launched Tessonics Inc., a company that was originally created to service the automotive industry through the development of devices used to measure the strength and safety of steel welds.

Tessonics Inc. began strategically shifting its focus from industrial manufacturing to neuroscience, diving into Ontario’s growing neuroscience community. With support from OBI and Federal Economic Agency for Southern Ontario, Dr. Maev worked with his colleagues at the Department of Physics, Dr. Elena Maeva and her team, to modify the function of his product. They created a new brain-imaging device called the Emergency Transcranial Ultrasonic Imaging System (ETUIS): a portable device that uses sound waves to reveal the structure of peoples’ brains—and has the potential to save lives.

The ETUIS allows for fast, accurate, and portable detection of compromised brain structures, such as in traumatic brain injury. By using ultrasound, the ETUIS can differentiate between healthy and damaged brain tissue similarly to how Tessonic’s original technology identifies weak points and tests the overall quality of steel welds for cars. The ETUIS can also detect foreign objects in the brain, determining their size, location and depth but in order for the ETUIS to work properly, it needs to be accurately calibrated on a regular basis. Adrian tackled this problem by developing synthetic models, or ‘phantoms’, of the brain. Phantoms are manufactured models of human tissues or organs and can be used for many applications, including medical student training, neurosurgery planning and, in this case, developing imaging devices. Adrian’s time in Windsor with Dr. Maev and his team revolved around the development of ultra-sensitive phantoms for the testing of this new imaging technology.

Brain and skull phantoms are not quite the same as the real thing but they offer pretty good simulations. Using different kinds of plastics and other synthetic materials, the phantoms are made to match the respective physical characteristics of the human tissue they have to mimic. Special features include: realistic blood vessels, aneurysms, and even static foreign objects so that phantoms can be customized for particular device-calibration projects and practice surgeries for rare medical cases.

Through OBI’s existing relationship with Dr. Maev and the Institute for Diagnostic Imaging Research which he directs, a path was forged for Adrian to take part in the OBI Entrepreneurs program to take his phantoms to the next level of product development. As one of OBI’s 2014/2015 entrepreneurs Adrian has now founded his own company, True Phantom Solutions Inc., which he runs in partnership with Dr. Roman Maev and Joe Udzbinac. The start-up company which only recently began in November of 2014 now provides products to imaging developers, hospitals, universities, and clinics throughout the province and the world including prestigious institutions like the Hospital for Sick Children, the Mayo Clinic, and L’Institut Langevin.

The development of True Phantoms Solutions and Tessonics Inc. is a testament to how Ontario-based companies are working together to drive a strong focus on neuroscience within the province—a focus which will help advance brain health technology and bolster Ontario’s economy.