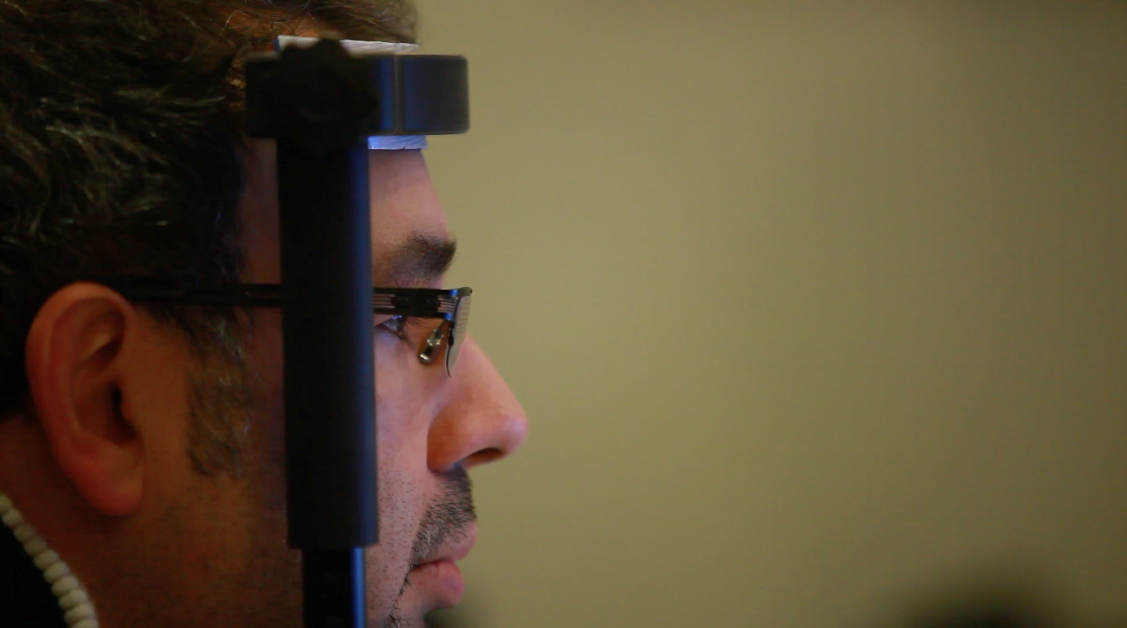 The eyes are said to be the ‘windows into the soul’. Now a novel technique is allowing researchers to take this romantic thought to a new level and use the eye as a ‘window into the brain’— to better understand and diagnose brain disorders.

“The circuit in the brain which controls eye movements covers almost the entire brain. So if you have almost any kind of brain disorder, there may be some change in how you control eye movements,” says Dr. Doug Munoz, Director of the Queen’s Centre for Neuroscience Studies and researcher with the Ontario Neurodegenerative Disease Research Initiative (ONDRI).

In fact, the study of eye movements has a long, established history in neurology.

“Before there was any kind of scanner, neurologists had to infer what was going on in the brain based on the behaviour of the patients. So if a neurologist really understood how the brain controlled eye movements, they could use that as a tool for diagnosis,” said Dr. Munoz.

The idea is that changes in the movement and structure of the eye might provide an early warning about neurodegeneration occurring in the brain. Neurodegeneration is a term which describes an ongoing loss of connectivity between brain cells (neurons) due to neuronal cell death, or changes in neuronal structure, resulting in a progressive decrease in normal brain function.

As part of the Ontario Brain Institute’s Ontario Neurodegenerative Disease Research Initiative, the ocular assessments will look at both the movements and structure of the eye in patients with neurodegenerative disorders including Alzheimer’s disease, Parkinson’s disease, amyotrophic lateral sclerosis or Lou Gehrig’s disease, frontotemporal lobar dementia, and vascular cognitive impairment or stroke.

“We are looking for specific abnormalities in eye movement behaviour as a biomarker, or observable indicator, for neurodegeneration. The next step is to see if those eye movements are present well before the patient is diagnosed with the disease in the clinic,” says Dr. Munoz.

The set up appears basic, a headrest, a camera, and a computer. But this simple-looking apparatus, the EyeLink 1000 Eye Tracker, has the ability to precisely measure eye movement in very fine detail.

Researchers will use a task called ‘anti-saccade generation’ as a way to assess damage or dysfunction in the frontal lobe of the brain. Frontal lobes control ‘higher order brain processes’ or ‘executive functions’ such as personality, planning, attention, short-term memory and motivation. Damage or degeneration of the frontal lobes is a common feature of stroke, Alzheimer’s disease, and Parkinson’s disease.

Saccadic eye movement is when the eye rapidly jumps from one position to another, such as alternating your gaze between two distant objects or looking out the window of a moving vehicle at the passing landscape. For the anti-saccade test, the subject is asked to focus on a fixed target. A stimulus is then presented and the subject is asked to look in the opposite direction. The natural tendency is to shift our gaze towards the stimulus, and the failure to overcome this reflex is associated with an error in the functioning of the frontal lobes of the brain—potentially an early sign of neurodegeneration.

“We are adapting this device to identify key signatures in those eye movements which might map onto different types of neurodegeneration, then see if you can back that up in time and use that as a predictor,” says William Schmidt of SR Research Limited, the manufacturer of the Eye Link 1000.

The goal of this project is to see if this test can be used as a non-invasive way to predict the onset of neurodegenerative disorders like Alzheimer’s disease, vascular cognitive impairment and Parkinson’s disease.

A second technique called ‘optical coherence tomography’ uses light waves to construct a super-high resolution 3-dimensional image of the eye—much higher in detail than could normally be obtained by other imaging techniques such as MRI or ultrasound. From this picture researchers can measure different aspects of the eye including the structure of blood vessels and nerve fibres. The researchers will examine these changes over time in a group of individuals with Alzheimer’s or Parkinson’s disease and compare the changes to that observed with normal ageing. Again, the goal is to identify markers linked to the progression of the disease to predict the degeneration in the earliest stages.

Keeping an eye on the brain

When combined with genetic, brain imaging, and neuropsychological measures also being collected on patients involved with the ONDRI program, ocular assessments provide valuable information about changes in the brain to help with early diagnosis and the development of better treatments for neurodegenerative disorders.

“When a patient comes into a memory clinic with a cognitive complaint or a diagnosis of dementia or neurodegenerative disease, it is late— a lot of damage has already been done. There are long prodromal stages (early, undiagnosed symptoms) in these diseases, and it is at these times that the disease is most treatable,” says Dr. Barry Greenberg, Director of the Neuroscience Drug Discovery and Development at the University Health Network and a researcher with ONDRI.

Although there are few treatments for these disorders, there are many lifestyle interventions which are known to delay the onset or help manage symptoms. Starting these early on in the disease process is the best chance to improve the lives of those individuals affected by the disease.

And until we figure out a way to understand exactly what is occurring inside the brain, the eye will continue to serve as a window into this mystery world.