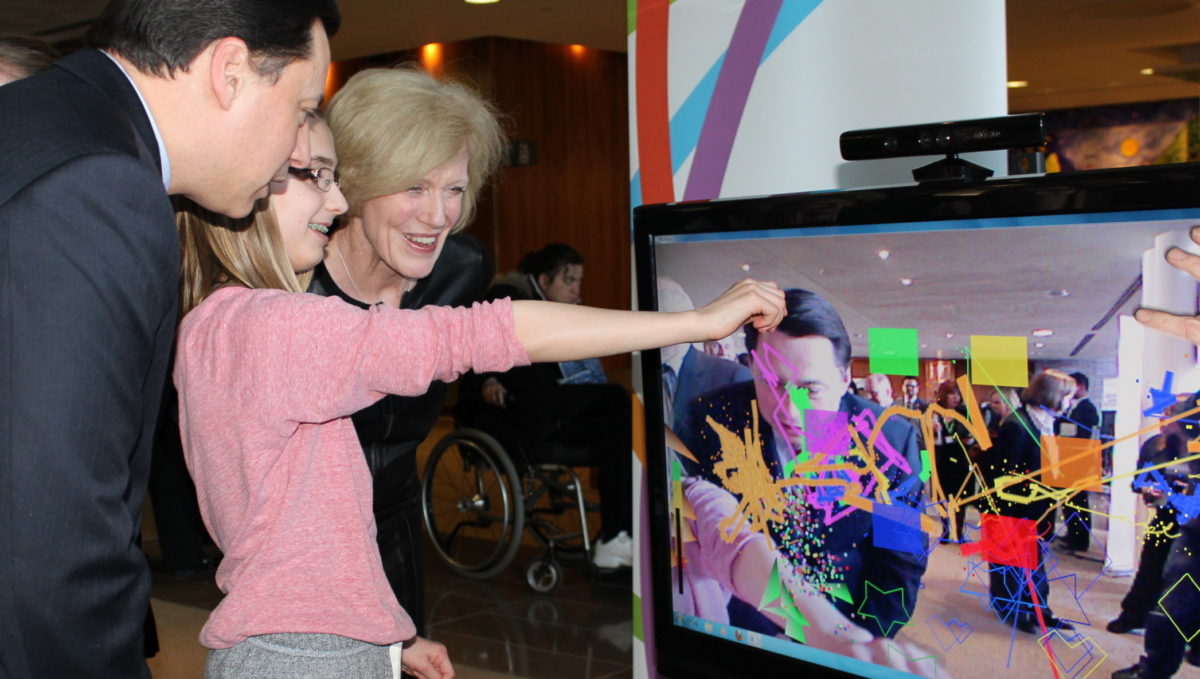 Experts at Holland Bloorview Kids Rehabilitation Hospital are turning popular video games into a new form of home-based therapy for children with one of the most common types of cerebral palsy (CP).

Hemiplegic CP is caused by a brain injury that occurs during pregnancy or early in life, often after a stroke.  The result is weakness on one side of the body.  Children with hemiplegic CP tend to use their stronger side more frequently, further limiting the development of their weaker side, which creates difficulty with activities that require two hands. While the severity of hemiplegic CP can vary widely, it’s estimated that up to one in every 1,000 children is affected by the condition.

A common treatment for kids with hemiplegic CP is Constraint-Induced Movement Therapy (CIMT).  CIMT involves restraining or casting the stronger arm so that it can’t be used. Patients are often sent to camp for the therapy, where they work with experts to perform tasks using their weaker side.

“Because a young brain is developing and flexible, this type of therapy can lead to critical reorganization of brain pathways,” says Dr. Darcy Fehlings, Senior Scientist in Developmental Paediatrics and Physician Director of the Child Development Program for Holland Bloorview, and lead of OBI’s CP-NET project.  “CIMT appears to drive motor control activity back to the side of the brain that has had the injury, helping to balance motor control activity on both sides of the brain.”

CIMT is a proven therapy, associated with significant improvements in fine motor skills, spontaneous use of the weaker side of the body, and an ability to perform tasks that require two hands, such as doing up a zipper or cutting food.

“The problem is, being put in a cast isn’t very enjoyable for kids,” says Dr. Fehlings. “We’re always looking for ways to improve treatment, to make it more effective and appealing.  With today’s technology, it’s possible for therapy to be accessible and fun.”

The team is exploring a platform called Kinect, a gesture-based interface for video games. It uses special cameras and something similar to sonar technology to recognize shapes in space, creating a three-dimensional, moving image of the objects in its view. Information captured by Kinect is translated into corresponding actions on a computer screen.

“The system is actually so sensitive that it can also recognize individual human body parts, joints and their movements, and even distinguish between human faces,” says Ajmal Khan, Research Engineer for Holland Bloorview and the Lead Software Developer on the project.  “That means Kinect can understand what side of the body a child is using to play a game, so we have an opportunity to program games that encourage kids to use their weaker side to perform important exercises.”

The team is currently reworking popular and readily available games, like Angry Birds, for use with Kinect.  Games will be reprogrammed so kids are rewarded for performing activities with their hemiplegic arm, and discouraged from using their stronger arm; for example, by only allowing the use of the hemiplegic arm in single-handed games and awarding more points to the hemiplegic hand in games that require both hands. There’s even the potential to create joint-therapy scenarios, where children can participate in virtual therapy together.

“We’re focusing on games that include movements that are typically hard for children with hemiplegic CP to perform, such as finger, thumb, wrist and elbow extension,” says Khan.  “Keeping with the Angry Birds example, tapping the screen would be equivalent to a wrist extension, pulling back the slingshot would help move the wrist around while it’s extended, and removing a finger from the screen would return the wrist to a steady state.”

Once a full suite of games has been developed, the team will enroll children in a pilot study.  Participants will first take part in an fMRI and functional assessment by health-care professionals to measure their baseline brain use and hand function during exercise.  They will then be given a Home Virtual Reality System (HVRS), including the Kinect camera, a laptop computer and some video games to play at home.

Therapists will prescribe the motions they want kids to work on at home, and ask them to play their games for one hour a day, five days a week over the course of a month.  All pilot participants will be brought back for two more fMRIs and functional assessments – one immediately following their course of treatment and one following a month-long break from using the HVRS.  The intention is to understand the immediate and long-term effects of HVRS therapy.

“HVRS has the potential to greatly improve patient satisfaction with therapy,” says Dr. Fehlings.  “Eventually, we’d love to see these modified games commercially available, so that kids across the world have easy access to an effective therapy that’s fun and easy to use at home.”

1 thought on “Playing for better health”