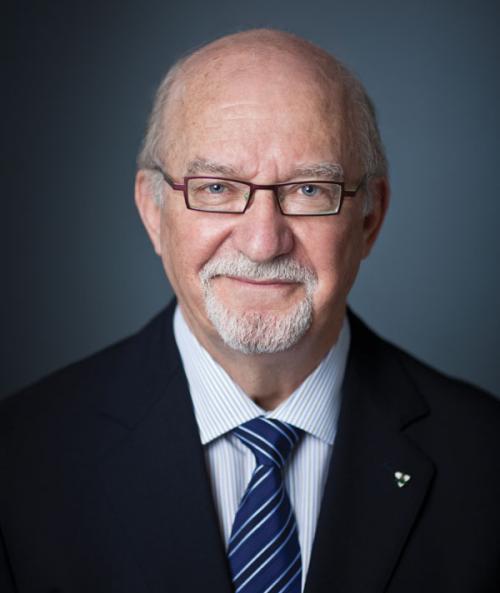 A message from Dr. Tom Mikkelsen, President and Scientific Director

The Order of Canada is one of Canada’s highest civilian honours. It recognizes an individual’s outstanding achievement, dedication to the community, and service to the nation. 2017 marks Canada’s 150th anniversary and the 50th anniversary of this unique award. During this especially notable year, we are thrilled to celebrate the recognition of the Ontario Brain Institute’s (OBI) Founding President and Scientific Director, Dr. Donald Stuss.

Don’s scientific contributions have advanced our understanding of brain function, brain injury, and rehabilitation. As a result, we are better at caring for people with brain injuries, and have a deeper appreciation for the part of our body that determines who we are. After over 25-years of carrying out internationally renowned research and delivering exceptional care as a neuropsychologist, Don transitioned into the area of research administration as the Founding Director of the Rotman Research Institute. During his 20-year appointment at the institute, he shaped it into a premier international centre, globally acclaimed for its expertise in the study of human brain function and aging.

In early 2011, the late philanthropist, Joseph Rotman, convinced Don to leave retirement behind to embark on a mission that would aim to make Ontario a world leader in brain research, commercialization, and care. This resulted in Don’s appointment as the Founding President and Scientific Director of OBI. After getting the organisation off the ground quickly, Don was able to demonstrate OBI’s present and future value to secure renewed funding from the Province of Ontario for a five-year period.

As we head into OBI’s next phase Don’s long-term vision continues to guide our progress. We stand behind the patient-centred, integrated approach to neuroscience research that he initially set up and we are confident that this “team science” strategy will carry on having important impacts on people’s lives and the future of Ontario.

This award is one of many for Don with others including: the Order of Ontario, the province’s highest honour; the Queen Elizabeth II Diamond Jubilee Medal; the Gold Key Award, the highest honour presented by the American Congress of Rehabilitation Medicine; the International Neuropsychological Society Lifetime Achievement Award; the Donald O. Hebb Distinguished Contribution Award, the Canadian Society for Brain, Behaviour and Cognitive Science’s highest recognition of scientific contributions; and the title of University Professor of the University of Toronto, the University’s highest status award given to only two per cent of tenured faculty.

On behalf of everyone at OBI, it is an honour to congratulate Don on another outstanding achievement!